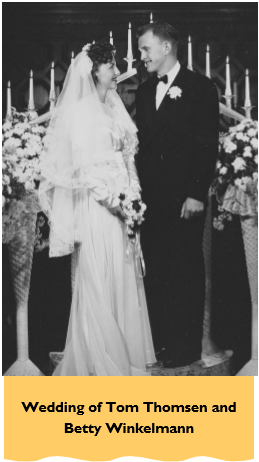 22nd.  It is rather fitting that we make note of it at this time since "Tommy" went home to be with the Lord on May 21st of this year (2013).  Betty had preceded him there in 1998.  A beautiful couple whose family roots are deep in Trinity's history.

1/6/46  "Beginning with today's 'Chimes', the Senior Leaguers are relieving Pastor Jeske of its publication. The Leaguers in charge are Joyce Winkelmann & Lorraine Stegemann..."

1/13/46  "Our Junior Leaguers will have a potluck meal after this service and then pack the clothing and canned goods which have been given for European relief."

And this fascinating entry:

During and immediately after World War II, more than 60,000 servicemen who married women overseas were promised that their wives and babies would be delivered to their doorsteps free of charge.  "Operation War Bride" began in Britain in early 1946.

"They sailed to America in 1946, the fresh-faced, eager young brides of GIs who had come to England to help liberate Europe from the Nazis and who had fallen in love along the way..".The Chicago Tribune

The Queen Mary (now a museum and hotel in Long Beach) was one of the "war bride ships".  One of those brides recalls "there were clotheslines stretched the length of the ship with nappies (diapers) drying in the wind.  It was a sight to behold."

Two of our current members celebrated a special day in April 1946:

4/21/46   "The marriage of Oge Thomsen and Joyce Winkelmann will be solemnized in our church this afternoon at 4:00 o'clock.  You are invited." 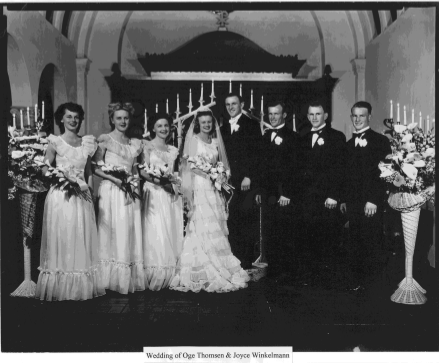 5/5/46   "Our congregation will take part in the Synod-wide collection next Sunday, Mother's Day, for our work among our boys in the armed forces of our country and among the many wounded in the hospitals..."