The “Trinity Chimes” noted some changes, some celebrations and the cloud of war moving
across the world in 1939. A change to the worship service was made early in the year:
1/15/1939: “German services will be discontinued after the last Sunday of the month.”
There was a major celebration on June 28, 1939, marking the Centennial of the arrival of the Saxon immigrants. 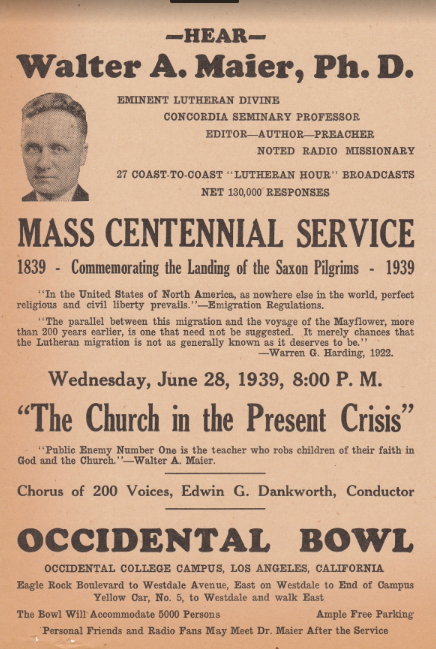 The District News attachment of September 1, 1939, contained the following notation: “Pastor Reno Jeske, members and friends of Trinity, Whittier, are happy to know that the congregation was able on July1, to pay the last and final installment on its church debt.”
A section of the District News was titled “Pastoral Vacations” and listed those who had trav-
eled during the summer of 1939, encouraging congregations to grant needed rest and recu-
peration to their pastors. Pastor O. W. Wismar of Grace Church, Los Angeles, was listed as
being on vacation in Vienna, Austria:
“...bound for Berlin and other continental points. Caught in the present European emergency, a dispatch advises that Pastor and Mrs. Wismar will endeavor to come home via Oslo, Norway.” (Hitler’s troops invaded Poland September 1, 1939. Britain, France, Australia, and New Zealand declared war on Germany on September 3, 1939.)
Still, God’s work goes on:
11/12/1939: Wheatridge Sanatorium Christmas Seals were being sold by the Walther Leagu
ers “to provide a charity fund at our sanatorium in Denver, Colo, for persons, mostly young
people, who are afflicted with the dread white plague (tuberculosis)...”
As the decade ended, no one knew what the next would bring. The January 1940 District
News closed with this verse:
“So I go on, not knowing the future, I would not know if I might;
I would rather walk in the dark with God, than go alone in the light;
I would rather walk with Him by faith, than walk alone by sight.”
-Pauline Hiles, Summer 2011
Posted on October 21, 2016 9:18 PM by Arthur Schulert